All kendo practitioners like it tough. Rigorous training to the point of exhaustion is an essential part of kendo and all martial arts. The aim is to polish technical ability and temper the body and mind to withstand any kind of adversity. In addition to tournaments and promotion examinations, there are several important training events on any kendo enthusiast’s yearly calendar. Perhaps one of the most challenging is the tradition of Kangeiko—or, midwinter training. The whole point of Kangeiko is to train intensively at the coldest time of the year to make it as galling as possible for all concerned. The only way to succeed in kendo is to treat the boundaries of one’s comfort zone with utter contempt.

Nihilistic as it sounds, as with all the grueling practice methods employed in kendo, there is method behind the madness. Being so cold, usually in the minuses, the practitioner must keep moving in order not to freeze to the floor. What better way to keep warm and functioning than by engaging in copious amounts of kiri-kaeshi and kakari-geiko, attack, attack, attack. Kangeiko is a time when kendoists run around like headless chickens whacking and hacking with all their might to build up strength, stamina, fortitude, and that all-important ‘never-say-die’ attitude.

And so, a group of 15 intrepid kendoists from 10 countries gathered in Fukushima (formerly the samurai domain of Aizu on January 26-28, 2020 to advance another step along the perpetual path of kendo study. Fukushima is renowned as the home region of some of the most stoic samurai in the history of Japan, not to mention being one of the coldest parts of the country in the winter season. A perfect setting for Kangeiko… This year, however, was one the warmest winters on record in Japan, with the Meteorological Agency announcing that snowfall is at its lowest level since records began. Usually chest deep in snow in January and February, not a flake was to be seen on the streets in Aizu-Wakamatsu. Even the mountains in the distance were eerily snowless. It was an odd scenario indeed.

Yet, undeterred by this vivid indication that the earth is running a dangerously high temperature, the Kangeiko group remained steadfast in its mission to soak up the samurai essence that characterizes Fukushima, and embrace what cold there was. Our first port of call was the Nisshinkan, a school established in 1803 for young samurai in the Aizu domain. When boys of warrior families in Aizu turned ten years old, they entered the Nisshinkan to study subjects that would prepare them to administer and protect the domain. Fields of study included medicine, astronomy, protocols of etiquette, Confucian classics, calligraphy, and naturally, the martial arts. Revolutionary pedagogical methods made the Nisshinkan the best of around 300 similar samurai domain schools found throughout Japan, so what better place to hear a lecture on the rich samurai history of the region, the style of Bushido that Aizu warriors were famous for, and of course, the tragic story of the Byakkotai, a group of teenage Aizu samurai who, mistakenly thinking their castle had been destroyed by imperial loyalists, committed seppuku on Mount Iimoriyama as their last act of defiance and loyalty in the Boshin war 151 years ago. (https://samurai-spirit.com/samurai-spirit-tourism/story_01.html) 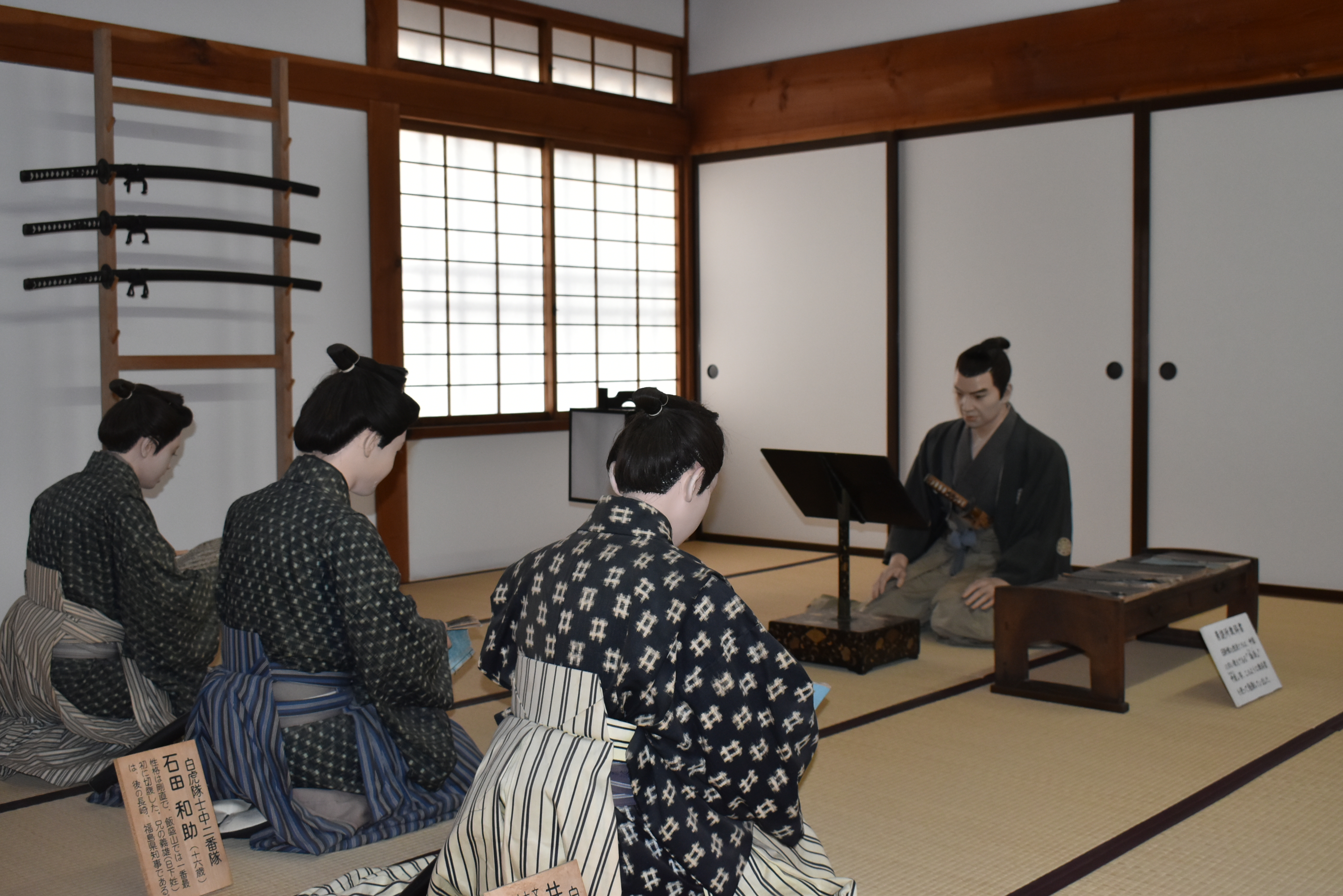 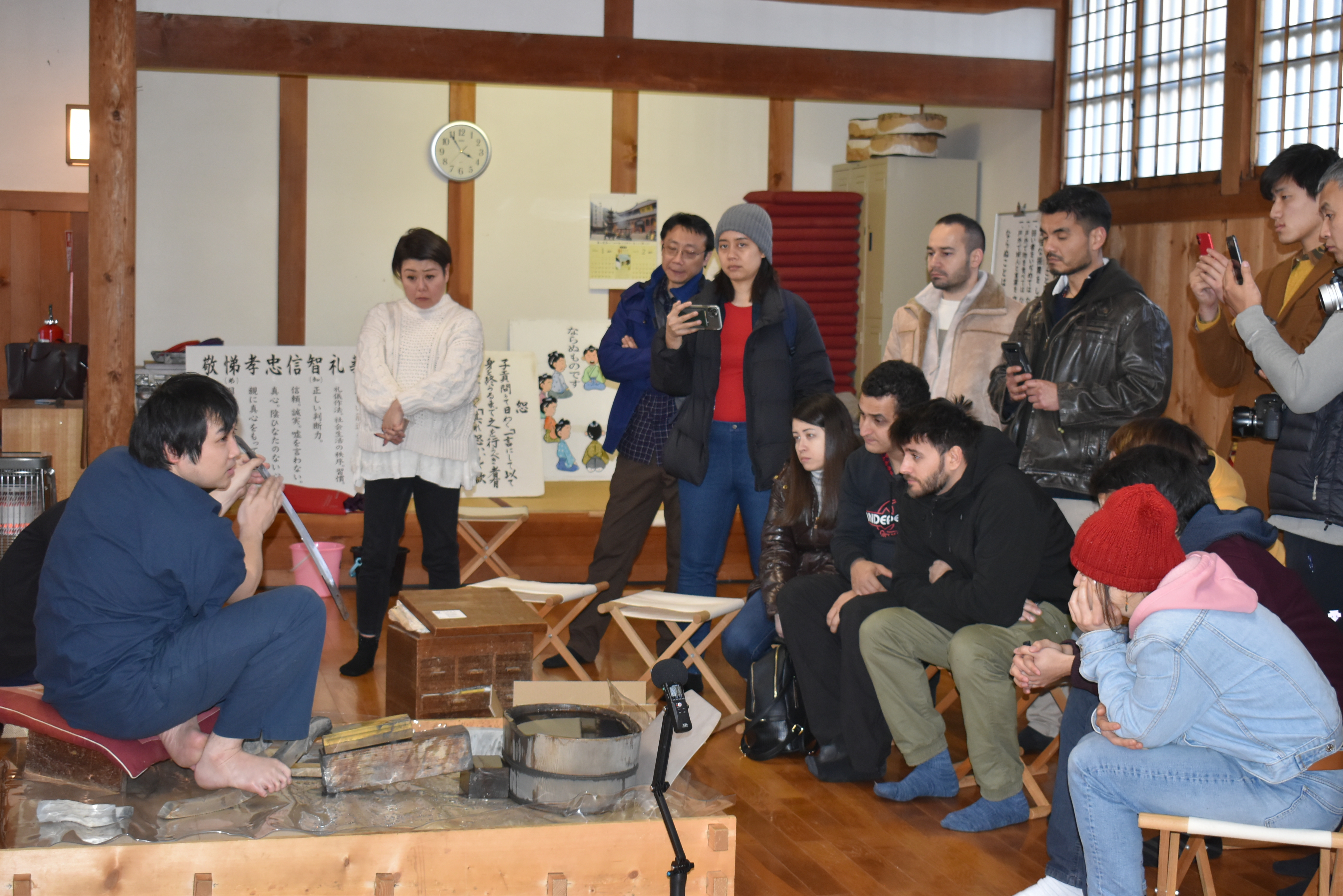 Aizu traditions and the cultural roots of our beloved kendo firmly in mind, the Kangeiko group then engaged in the first of four training sessions in the Nisshinkan’s traditional dojo. After a thorough shaking out of cobwebs, our bus took us to our lodgings. Hundreds of years ago in Japan, samurai swordsmen walked the countryside in the search of dueling partners in a practice known as musha-shugyo. The original motivation was to challenge other swordsmen and find fame through victory as a peerless master of the sword. Being an era of enduring peace, the Tokugawa Period (1603-1868) was a golden age for the martial arts in Japan, and with the advent of protective training equipment, the prototypes modern kendo equipment, duels were not the life-or death scenarios that they used to be. In fact, musha-shugyo became an excuse to see the country and make friends through crossing swords with samurai in different domains. Visiting swordsmen were treated as special guests, and after hard- fought bouts in the dojo, the hosts would often ply the visitor with food and drink, and even join them for a soak in the local onsen. This is exactly what we were treated at Hotel Higashiyama Onsen Harataki. What better way to conclude the first day?

Kangeiko is uncomfortable not only because of the cold, but because it requires getting out bed at some ungodly hour before sunrise and sleepily lugging one’s armour to the dojo in anticipation, some say dread, of the frenetic exercise that follows. At 6:15am we entered the beautiful Aizu Butokuden’s dojo situated at the foot of the imposing Tsurugajo Castle. Never will you find a more beautiful and authentic dojo anywhere, even in Japan. Built in the 1930s, the wooden floor is remarkably springy, and the sound of feet stamping on the floorboards with each attack resonates like the thunderous sound of taiko drums. It was akin to emotive background music in the climacteric battle scene of a Kurosawa movie. 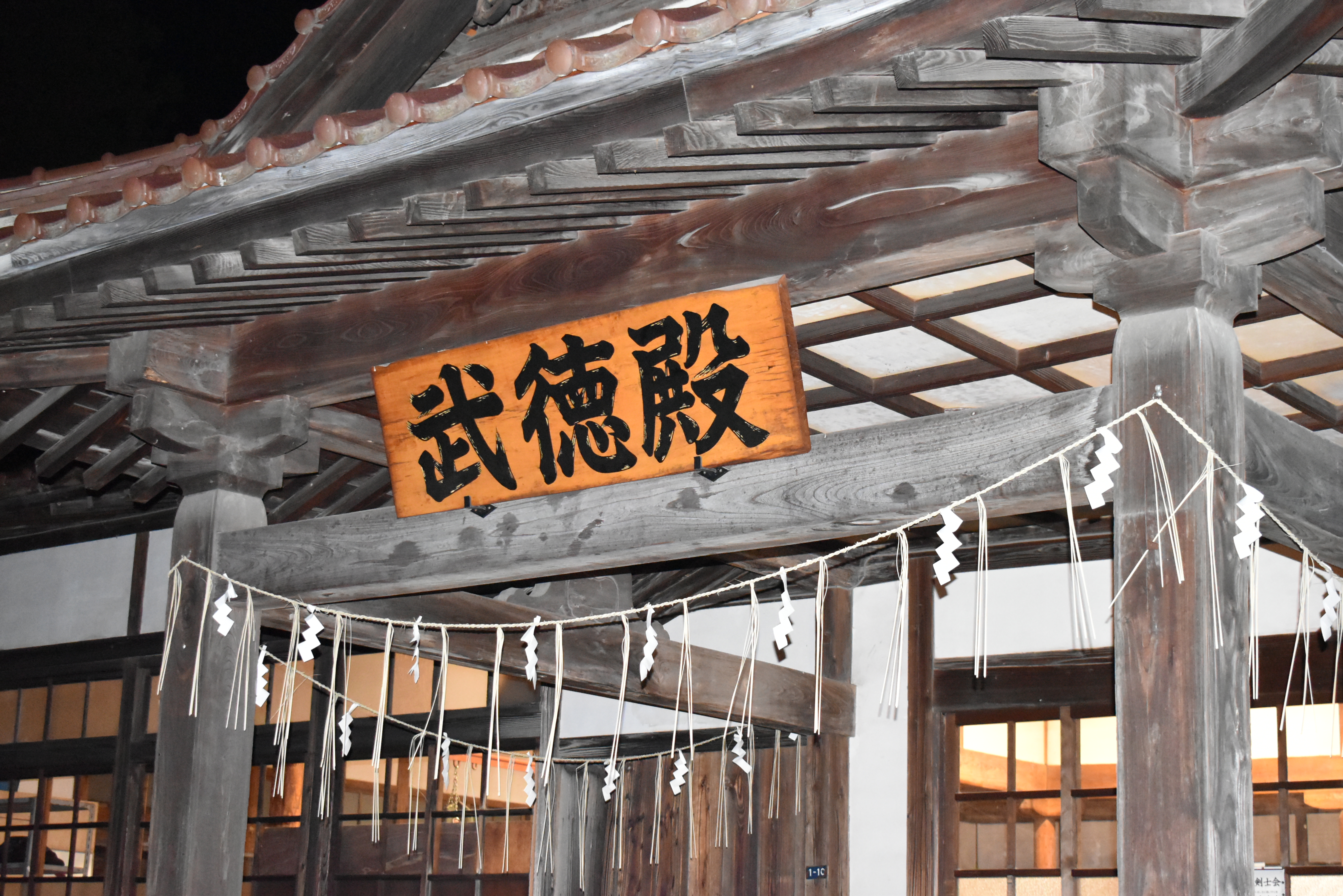 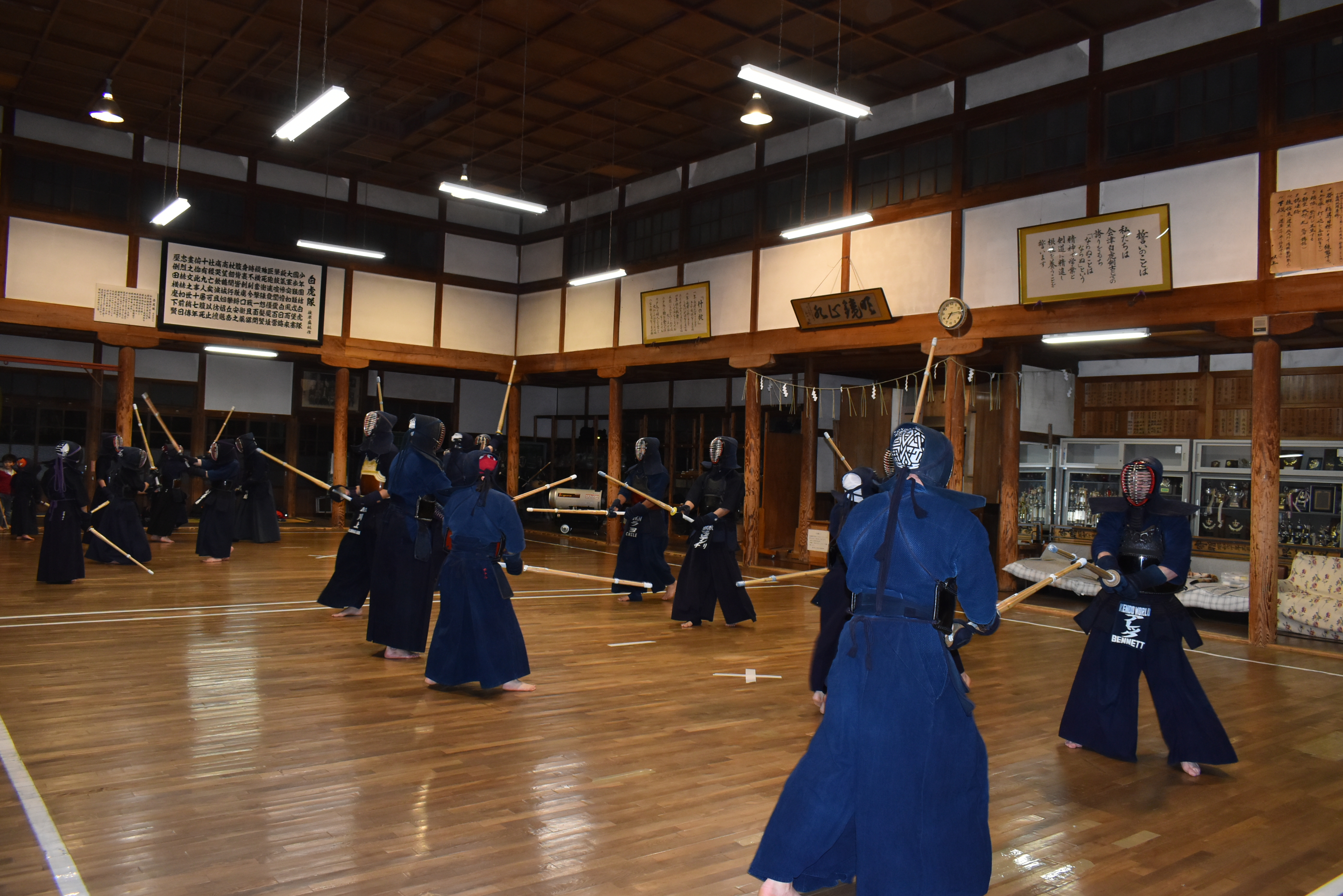 Under the dark brown dojo pillars stained by the expended energy of kendo adherents over nearly a century, the Kangeiko group lined up and kneeled in deference before the dojo altar. Sweat steaming from their faces and chests heaving, the dojo was suddenly plunged into a blanket of serenity and silence in stark contrast to the furious duelling of the last hour. Nobody was cold now. The group sat meditating, trying to control their huffing and puffing with a mixed feeling of relief and intense satisfaction. The training was much harder than the day before, and although this session had ended, the Kangeiko tour was just starting to heat up.

“Zanshin” is a key concept in kendo. Literally “lingering heart”, it means to maintain vigilance after a successful attack, never letting your guard down, and always following through. It is a mindset that demonstrates the utmost respect for one’s opponent. As a “follow through” to training, the Kangeiko group was guided to some of the historical sites talked about in the previous day’s lecture. Most would agree that the highlight was the gravesite of the young Byakkotai members who died by their own hand through dedication to their duty as samurai. As a sign of respect, the group swapped their shinai (bamboo swords) for brooms and cleared the leaves and grit that had settled on the gravestones. Different epoch and entirely different cultures, it was through kendo that we felt a connection. Although difficult to express in words the experience was profound. The following two training sessions, with the local kendo community that evening, and then again early the following morning seemed so much easier after solemn contemplation at the Byakkotai resting place. I think it is fair to say that the group understood that training hard at the coldest time of the year isn’t going to kill you. Instead, it makes one appreciate what it is to be alive. The walls of the comfort zone were pushed out just a little further.

At the end of the trip, Kangeiko tour participants were physically tired, but still brimming with energy and warmth. It was only a short stint in Fukushima, but as always, I personally came away with yet a deeper appreciation of the roots of Japanese martial arts, and the depth of the spirit and philosophy that underlies kendo. Finishing with a delectable meal of onion buckwheat noodles at Ouchijuku, a centuries- old village unwittingly preserved in the gum of time, we also got to crunch through a blanket of snow that had fallen in the night. Better late than never. Now it was complete. Thank you, Fukushima. 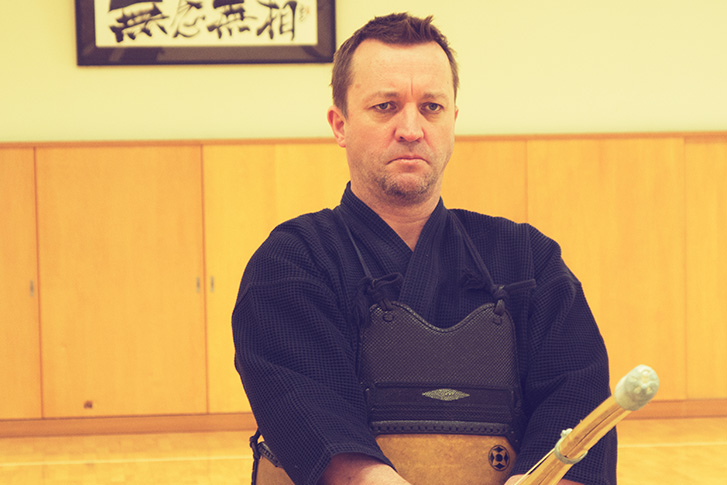