Fukushima is the southernmost prefecture in the Tohoku (North East) region of Japan. It is an hour and twenty minutes away from Tokyo by bullet train. Like the other prefectures in Japan, Fukushima was formed after the Meiji Restoration, and is made up of parts of the former provinces of Mutsu, and Iwashiro. Present day Aizu-Wakamatsu and Tsuruga castle, the base of the Aizu clan, were at the entry point to Mutsu province when coming from Edo.

Aizu was a large part of Mutsu province, and a very powerful clan during the Edo period (1600-1868). The Aizu clan were known for their military prowess and the fighting spirit of their warriors. So much so, that the ninth Lord of Aizu, Matsudaira Katamori was requested by the Shogun to become the military commissioner of Kyoto to protect the Emperor during the turbulent bakumatsu era. Unfortunately, despite the Aizu clan showing their unflinching loyalty for the Emperor and the Shogun, the ended up of the wrong side by the time of the Meiji Restoration. The sincerity and loyalty demonstrated by the Aizu clan at that time has since been recognized as a pinnacle of samurai spirit. That spirit continues to live on in the people of Fukushima today.

Japanese swords are a symbol of the samurai, and therefore hold great importance to the people of Aizu. Blades by Aizu smiths were known for their strength and sharpness. Even so, these swords are not regarded as merely weapons, but also for their great spiritual significance, and much like traditional tea wares, are recognized as functional art. Much of the essence of the beauty of Japanese swords comes from the fact that althought they are made by man, they often reflect elements of nature. An aspect that resonates greatly with the Japanese aesthetic and is reflected in the romantic natural phenomena based terminology used to describe the crystalline activities in the steel (such as, falling leaves, drifting sands, and so forth). In short, the Japanese sword is not seen as a killing weapon, but as an divine object of beauty for spiritual and self protection.

Mr. Kenichi Endo (84) is a Japanese sword enthusiast living in Nakamachi, Aizu-Wakamatsu. He has had an interest in swords since his high school days. He proudly showed me a sword made from his collection by a master swordsmith of the mid 17th century. "This sword was made by the famous Aizu swordsmith, Miyoshi Nagamichi aroud the Kanbun era (1661~). He was also know as Aizu-Kotetsu because the workmanship not only resembles that of the Edo (Tokyo) master smith Kotetsu, but also because of the resilience and cutting ability his swords." Other famous swordsmiths of area include the 11th generation Aizu Kanesada, who made a sword that was said to be owned by the Shinsengumi Commander, Hijikata Toshizo, and another famous swordsmith son of Fukushima, the modern master swordsmith, Tsukamoto Ikkansai Okimasa. 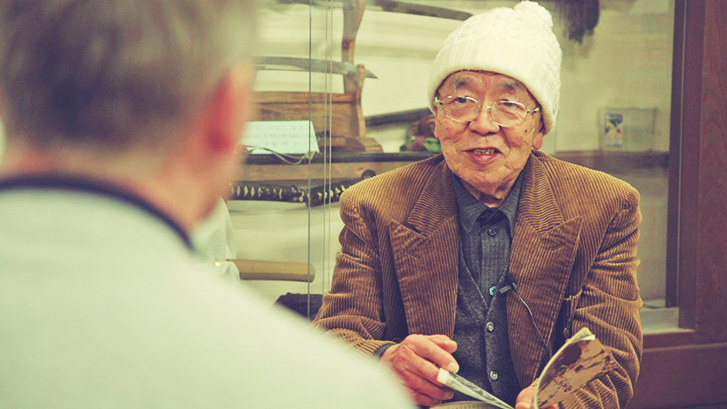 Mr. Endo grew up in Aizu-Wakamatsu, and was taught the Ju no Okite, or rules of conduct for the children of samurai that have been passed down from generation to generation to this day. "Yes, these rules are still taught to the young people of Fukushima today." he says. There are seven main rules and a closing rule.

The additional eighth rule directly translates as no, means no, but Mr. Endo explained that within Fukushima it is commonly known that it means that the above rules are to be adhered to without fail.

The influence and power of these words are illustrated in the actions of the Byakkotai in 1868. The Byakkotai were a unit of teenage warriors formed as a military support unit. At the Battle of Tonoguchihara, twenty members of the Byakkotai, aged between sixteen and seventeen, committed seppuku on Iimori hill in Aizu-Wakamatsu after mistakenly thinking that their Lord's castle was on fire and that the battle was lost. Every year a performance is made in their honor. It is called 'Kenbu', and generation after generation of Aizu-Wakamatsu High School students have performed in this troupe. Mr. Endo was also a part of the Kenbu performance group when he was at school. He showed me a photograph of himself in the group from 1946, when he was thirteen years old. 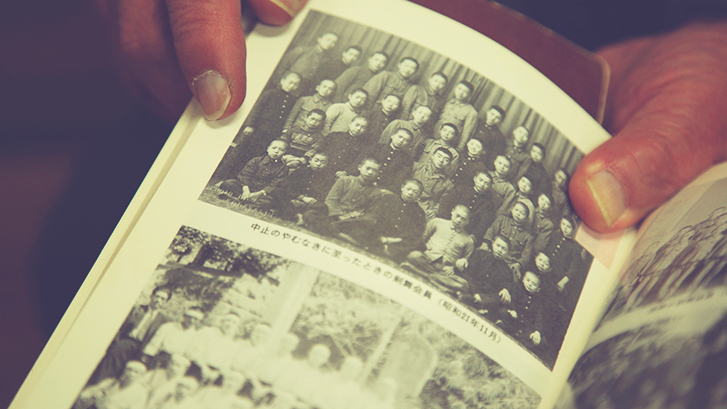 Mr. Akira Watanabe (74) is a third generation traditional Japanese urushi lacquerer and also the director of the Aizu branch of the Society for the Preservation of Japanese Art Swords (NBTHK). Mr. Watanabe is an expert in producing a style of lacquering that is unique to Fukushima known as Aizu-nuri. He explained that in the rest of Japan lacquer artists are usually referred to as nushi. However, unique to Aizu-Wakamatsu and surrounding areas they are called nuri-shi. He says that real Aizu-nuri can only be performed in the Aizu-Wakamatsu area, as Aizu craftsmen were rather secretive, and there is a continuous direct lineage in the passing down of the techniques within the area. However, he is not limited to that style, and can perform all types of traditional Japanese urushi lacquer styles. Also, he does not only lacquer sword scabbards and armor, but all types of traditional Japanese wares. Mr. Watanabe laments that there are no longer any sword craftsmen living in Aizu-Wakamatsu and fears that among the remaining craftsmen in Japan that the old techniques are being lost to time. He said, "We have only one swordsmith left in Fukushima, that is Mr. Masahira Fujiyasu, who lives out in Tameishita, outside Fukushima city." 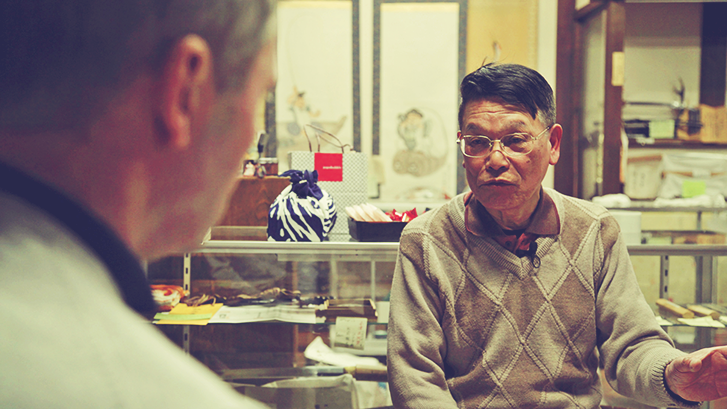 Mr. Watanabe said, that the reason for the lack of traditional sword craftsmen dates back to the Meiji restoration and the Haitorei Imperial decree of 1876, banning the wearing of swords in public. There was a major decline in the need for swords and related crafts. Many of the craftsmen turned to other crafts where they could utilise their skills, and many moved away to neighboring Niigata prefecture.

Over in Koriyama, Mr. Kenji Tsukamoto (68) is a professional Japanese sword polisher. His family are famous for being involved with Japense swords. His father was a swordsmith and he himself studied sword making along with his very famous son of Fukushima swordsmith uncle, Ikkansai Okimasa, under the master smith Kasama Ikkansai Shigetsugu. Kenji said that when modern made swords were not so popular and it was hard to make a living as a swordsmith, he thought that with his skill set that he would become some kind of handyman. However, he was taken and introduced to master sword polisher (and later Living National Treasure) of the Hon'ami lineage Nagayama Kokan, and joined his school.

Kenji has two sons, Yoshiyuki (33) who is a prize winning sword scabbard maker and his younger son Hiroyuki (31), who became his father's apprentice and is now a prize winning polisher in his own right. Kenji says that he originally started this line of work by chance, as it was during a sword collecting and restoration boom and seemed like a good way to earn a living, but now he says he does it to preserve these precious cultural works of art for future generations to enjoy, but most importantly he loves his work. Hiroyuki his son agrees, but pointed out that it is not only important to preserve the swords themselves, but also to preserve and pass down the intangible skills required to ba able to do it. 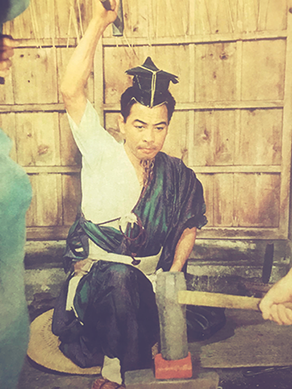 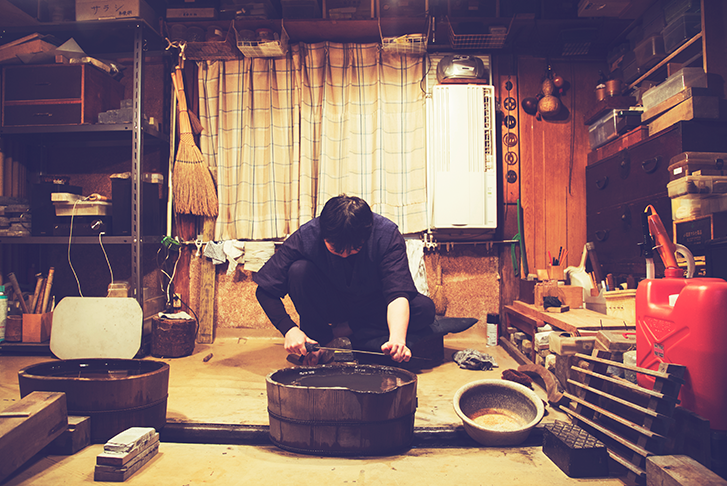 Kenji explained that this was the reason for the 20 year renewal of Ise shrine and the donation of the items that go into it. "People usually work on Ise shrine offering works three times in their career. The first time is early when they are training with their teacher, the next time is when they are usually at the peak of the career and their skills have matured, then lastly again when they have passed on their knowledge to their own students, and those students are also submitting works." Kenji also laments that there are no sword craftsmen in Aizu-Wakamatsu anymore, but says that in general the crafts are safe for the time being in Fukushima. Ouchi-juku is a small Edo period post village with many traditional thatched roof Japanese cottages in Shimogo, Fukushima prefecture. The village has been there for at least three-hundred years and has been preserved in its current condition since before the Edo period. Ouchi-juku has been designated by the Japanese Agency for Cultural Affairs as an Important Group of Traditional Buildings (Dentōteki Kenzobutsu-gun). The village sits on the old Aizu Nishi-Kaido road that was commonly used as a rest stop for parties of samurai who were travelling to Edo during the time when the Sankin-Kotai system was implemented. The Sankin-Kotai was a kind of hostage system that forced the Daimyo stay themselves or leave important members of their families in their Edo residences for up to two years at a time. It was also a requirement of the Sankin-Kotai that huge processions of samurai would escort the Daimyo on their trips to and from Edo. 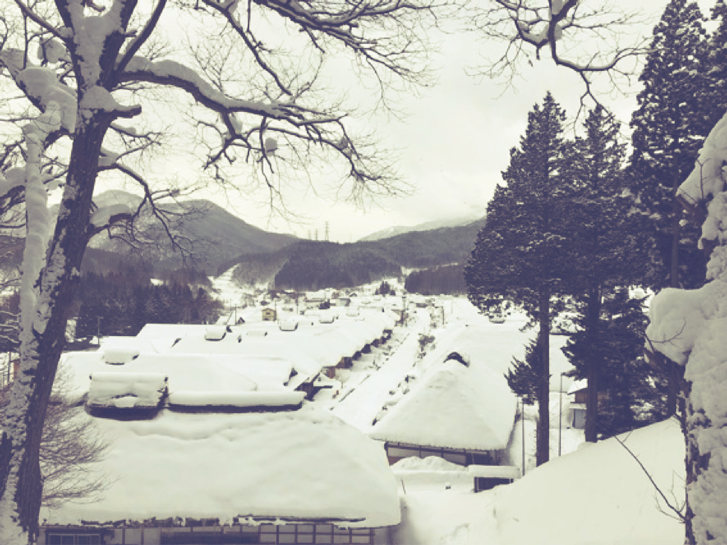 There are several small shops and a some traditional Japanese minshuku (Inn). The Okami san (the lady of the house) of the Hon-ke Ogiya minshuku has been there since she was young woman, when she came to marry her husband and help with the business. She says that the inn (that is also partly a converted traditional kura, or store house) is three-hundred years old, and that tourists from all over the world come to stay there. She says that, "Even though I can only speak Japanese, I never have any problem in communicating. Everyone that comes here are very friendly, and their desire to communicate transcends language." However, at the time of the Fukushima incident the people of Ouchi-juku who's living depends on tourism world came crashing down. Okami san recounted the time, "We suddenly got phone call after phone call, each one a cancellation until every single booking was cancelled. I cried and cried deep into the night, but later some Japanese celebrities came and stayed, and now the tourism is better than it has ever been. I am the happiest that I have ever been in my life." When speaking of the people of Fukushima, Okami san said that she feels that they are warm hearted with a strong sense of justice, probably due to the influence of the rules of the ju-no-okite. 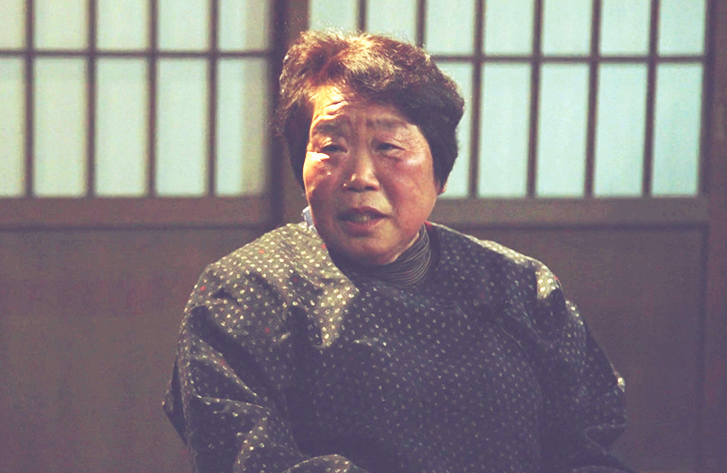 Although there is strong local pride in the various locations in Fukushima prefecture, the influence of the Aizu domain has spread all across the whole area. The military pride and prowess of the Aizu warriors is still fresh in the minds of its inhabitants, and even though samurai have not existed in Japan for around a hundred and fifty years, but the spirit of the samurai can still be strongly felt in the hearts and minds of the people of Fukushima even today. Even faced when with impossible odds, the people of Fukushima will never give in. The traditional Okiagari-koboshi souvenir dolls of Fukushima truly symbolise the samurai spirit of the people of Fukushima. No matter how many times they get knocked down, they will always get back up. 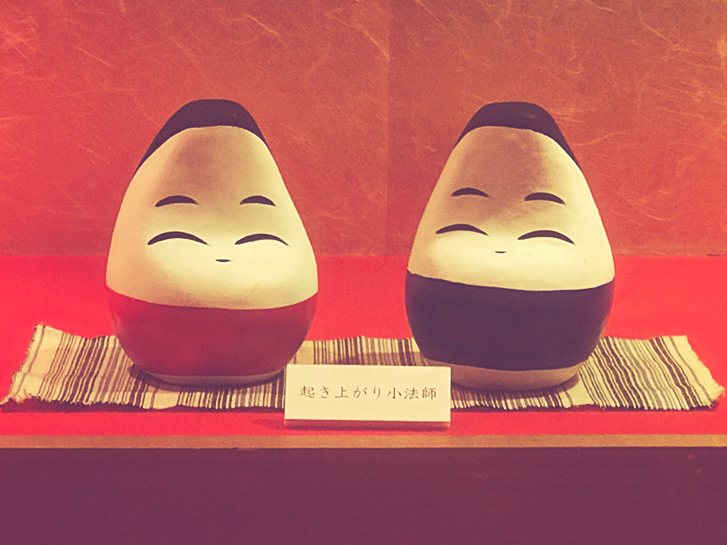 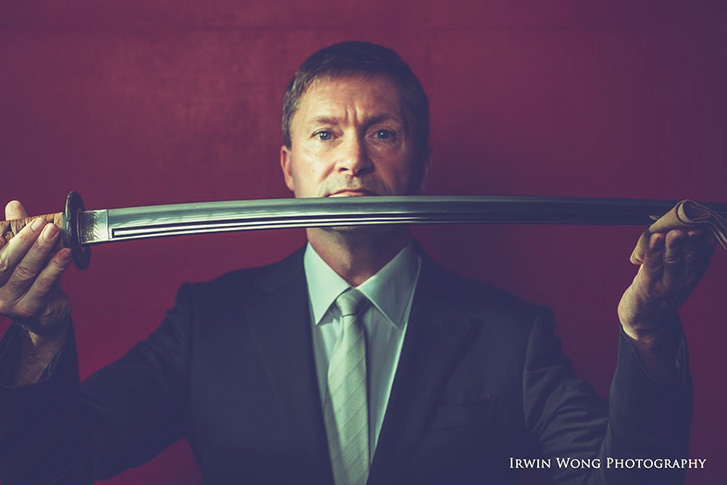